8 Must-Eats @ Lebuh Kimberley, Penang
* Some of the establishments / dishes below are not halal. Penang island is mostly associated as a food haven that attracts travelling hardcore foodies and tourists in search of good street food. Among those places that effortlessly pull in the crowd would be the food street of Lebuh Kimberley in George Town. Every day from 4 p.m. onwards, the crossroads where Lebuh Kimberley intersects with Jalan Sungai Ujong and Lebuh Cintra comes alive with the opening of hawker stalls ready to cook and serve for the night. There are several coffee shops and a good number of hawker stalls in the street that one would have to make few trips to be able to enjoy all the food there. If you are, however, hard-pressed for time, here are eight stalls that are just nice for a quick stop to savour some of the best foods on the island. (Click on the restaurant names for addresses and OpenRice members' reviews.)

The koay chap stall is easily identified, as it would be accompanied by a long line of customers seen waiting to order their food. It is thus advisable to arrive early. The dish consists of a type of Chinese noodle strips, stewed duck’s meat, hard-boiled egg and various pig intestines. It is garnished with coriander leaves and fried onions. The dish is sold at RM7, RM8 and RM10. Opening hours: 5.30 p.m. to 1 a.m., daily (closed Thursday) This stall in front of the Sin Guat Keong Coffee Shop is well known for its char koay teow, which has mantis prawns added into it. A generous amount of mantis prawns, normal prawns and fried egg are served in the dish. It is sold at RM3.50 and RM4.30. Opening hours: 5.30 p.m. to midnight, daily Take your pick from the various ingredients available from this lobak stall for an appetizer sort of meal or a quick snack. The menu includes lobak, prawn fritters, deep-fried bean curd, century eggs, fish balls, sausages and octopus. The food items are then served alongside a small bowl of gooey brown dip with a splash of chilli sauce. Opening hours: 4.30 to 9.30 p.m., daily (closed Thursdays) This stall, located in the Sin Guat Keong Coffee Shop, serves the dish that is also known as 'oh-chien.' At RM8 a plate, a generous amount of egg and large-sized oysters in sweet potato starch are served. It is topped with parsley and usually eaten with chilli sauce. You can also order it at RM12 and RM16. Opening hours: 5 to 10 p.m., daily (closed Tuesdays every fortnight) 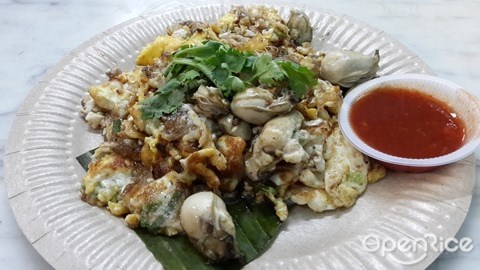 The Hong Kong-style chee cheong fun is filled with char siu (barbequed pork) and prawns. It is available at this stall that is right beside the Sin Guat Keong Coffee Shop. You have the options of ordering a small plate at RM4.20 or big plate at RM6.30. Opening hours: 6 to 11.30 p.m., daily (closed Tuesdays every fortnight) This popular and fast-selling tong sui (Chinese dessert) from Restoran Traditional Home of Dessert is best eaten with the crunchy 'you char kuay' (Chinese cruller). The strongly flavoured almond milk is usually sold out after 9 p.m. The milk filled with gingko nuts and crullers are sold together at RM5.60. Opening hours: 6 to 11 p.m., daily (closed Mondays) As with most hawker stall centres in Penang, it would not be complete without the ones selling Chinese desserts. Besides Restoran Traditional Home of Dessert, other dessert-selling shops are Dessert Old Time Delight Shop and Lo Yau Kee Dessert. 8 Best Places for Cendol in Penang

A bowl of cendol may look humble but certainly has its own irresistible charms. This traditional local dessert gas repeatedly proven to be a satisfying treat among adults and children.