Authentic Fuzhou Delicacies? Sitiawan has The Answer to It!

Sitiawan, also known as ‘Little Fuzhou’ of Malaysia, is located in Perak which requires approximately 3 hours of time while Ipoh only approximately 1 hour and 20 minutes only. Sitiawan is one of the of as there good sceneries and most importantly the Fuzhou delicacies! If you have time to travel to Sitiawan, there are some must-eat and places to visit in order to have an enjoyable trip.
Must-Eat
1. Sitiawan Cheong Cia Gong Pian Photo Credit: jtsh90, .a.wong, michellet86, kartiinee_m
The Gong Pian is one of the that represents Sitiawan which is a must to eat to show that you have reached Sitiawan. As for the Cheong Cia Gong Pian, they are one of the top Gong Pian in Sitiawan which there is often a great queue! The Gong Pian is handmade and you can even see it in their shop and uses charcoal grill. Every day, the Gong Pian and made sold that day and they are fresh and crunchy, filled with the taste of the of sesame, onion and pork oil.
2. Red Wine Mee Suah, Hot and Sour Fish Maw Soup@ Lido Restaurant Photo Credit: maym3i, ahping_2011
The red wine mee is one of the well-known Fuzhou delicacies which they use the Fuzhou’s red wine which is made from red rice. As for the hot and sour maw is also recommended as it is one of the by the Fuzhou people during festive seasons. At Sitiawan, It is commonly found! Come over to Lido to try this out, if you have never tried them!
3. Fuzhou Pillow Pau@ Yee Si Restaurant Photo Credit: Sky2404
The pillow pau is one of the traditional Fuzhou food which is now rarely found already. There is either peanut, red bean paste or kaya in the pillow pau and it would be out for sale every afternoon at 3 p.m. There is always a long queue for it, very worth trying!  Remember not to miss it out before it is too late!
4. Fuzhou Tau Sar Piah@ Kedai Biskut San Yew Chay The Fuzhou Tau Sar Piah in Sitiawan is something not to miss out other than the Gong Pian. San Yew Chay has a history of up to 70 years which the business already operates for three generations. They are still the traditional method of making the Tau Sar Piah and the filling can be either green bean or red bean paste. There is option which San Yew Chay have already made frozen Tau Sar Piah that let you all buy also!
5. Loh Mee, Dry Mee and Long Yen@ Stall outside Pasar Kampung Koh Photo Credit: Steven Yap
The stall is located under a big tree outside the morning market at Kampung Koh. The noodles they sell are well-known among the locals and the tourists also gave good comments of them. The noodles are delicious and the price is reasonable. The recommended noodles are the Loh Mee and Long Yen! Long Yen may sound new to you, this noodle is often eaten by the Fuzhou people! The noodle is made of tapioca powder and eggs, with good soup, Char Siew, bean sprout onion, very worth trying!
6. Cendol@ James Cendol The cendol stall is located opposite the Indian temple, Maha Mariamman. With a strong and thick coconut aroma and chewy cendol, a good choice during hot weather! There is a choice of adding glutinous rice to the cendol!
7. Sweet Potato Ball@ Nan Wah Kopitiam These sweet potato balls are also one of the traditional Fuzhou foods. Most of the people of Fuzhou people how to make it and it with noodles. They are in round balls made of sweet potato and filled with minced and diced meat, dried , , onions and several other ingredients. If you are thinking to find a place to eat it, come to Nan Wah Kopitiam which sells many Perak local food including the sweet potato ball and Long Yen.
8. Steam Fish Head@ Chai Chin Restaurant There is an exception here that is also a good food in Sitiawan. Chai Chin Restaurant is a good food restaurant and has been operating more than 20 years in Sitiawan. The signature of the shop is the steam grouper fish head with some onions and spring onions, remember to squeeze some lime juice on the fish head which it the taste more. It is greatly recommended by the locals and even the tourist that have been there!
9. Seafood and Fuzhou dishes@ Laut Villa Restaurant 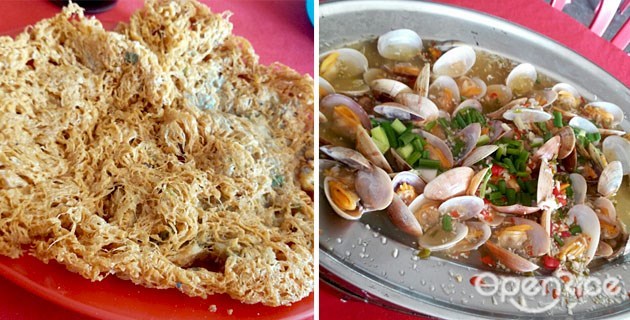 Thinking about where to have your dinner at Sitiawan? Consider about Laut Villa Restaurant which is located at the Kampung Cina nearby the beach. Enjoy the good location with food here! The signature dishes are such as Fuzhou style fried oyster which is the preference from the kid till adults!
10. Kampung Koh Chilli Sauce The Sitiawan Chili Sauce is a must buy! They are even well-known throughout Malaysia and even sold to oversea. It can be eaten along with any food like dim sum as they have a unique taste of the chili and garlic. The Temple is located at Pasir Panjang and they have the largest Tua Pek Gong statue throughout Malaysia. The temple has up to a century of history and an attractive point is that the Tua Pek Gong statue’s height is 48 feet (about 15 meters).
2. Taman Paya Bakau Love to visit the natural environment? Head over to Taman Paya Bakau! Enjoying the natural scenery, giving a rest from the city life and you also can come over here to fish also!
3. Marina Island Marina Island, a man-made island, is located at Teluk Muroh. There is a Jetty Complex where they would be many boats or ferries would stop by, many of the people love to come over here to check the sunset out. The island has a resort and cafes by the seaside, best way to enjoy the scenery while a cup of coffee. Teluk Batik is also another beautiful beach at ! Come back the beach to play or relax your mind by looking at the beautiful sea.
5. Segari Turtle Sanctuary Photo Credit: Hooi Feng
You get to check out the sea turtle when you come over to Sitiawan’s Pantai Remis. They have the Segari Turtle which you get to see the turtle in different sizes including from eggs to turtles. There is also a sea turtle museum which let the public to know more about .
6. Sitiawan Settlement Museum

Coming into the museum, you get to know more about Sitiawan’s history. There are many antiques and old pictures, there is also some history regarding the people of Fuzhou coming to Malaysia. If you are interested , come over here!