8 Sumptuous Poon Choi for CNY 2015!
Poon Choi or Poon Choy is a traditional Chinese dish originated from Hong Kong with over several hundred years of history. The dish is served with lots of different ingredients that are arranged layer by layer in a big wooden or steel bowl. The ingredients on top are normally fresh seafood, such as abalones, prawns, and scallops, while other ingredients, such as meats or vegetables, are placed underneath, so that they can absorb the essence of the gravy. Photo credit to Dragon-i
Price: RM388++ (RM350++ for Dragon-i members or Hong Leong Bank credit or debit card holders) Dragon-i Group of Restaurants is one of the pioneers in offering Poon Choi during the season of Chinese New Year in Malaysia. Their Poon Choi is named as Treasure Pot, which is available from 16th December 2014 to 15th March 2015. The treasure pot is also available for takeaway on Chinese New Year Eve, so that you can enjoy the delicious dish with your family at home. 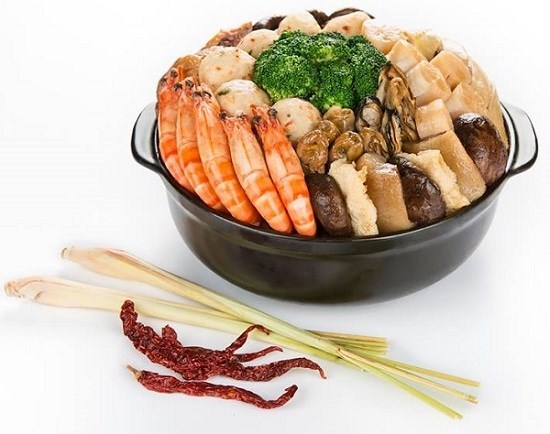 Photo credit to Tai Thong
Price: RM298++ for 5 and RM498++ for 10 This year, Tai Thong Group of Restaurants has launched an innovative Poon Choi with a Szechuan twist. Dried chili and lemongrass are added when preparing the gravy to infuse a unique spicy and sour flavor to the Poon Choi. 15 different ingredients, including seafood, meats and vegetables, are included in the Poon Choi to make the dish not only appetizing, but also very flavorful and delicious! Photo credit to Unique Seafood
Price: RM228++ for 5 and RM438++ for 10 Unique Seafood Group of Restaurants currently has 3 restaurant brands under its umbrella. To celebrate the joyful season of Chinese New Year, they have launched a luxurious Poon Choi that will satisfy everyone’s craving for fresh seafood and meat. Top up another RM100 (for 5 pax) or RM200 (for 10 pax) to add in abalones. The Poon Choi is also available for takeaway on Chinese New Year Eve. 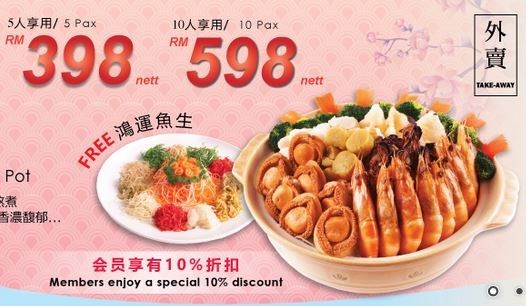 Photo credit to Dynasty Dragon
Price: RM398 nett for 5 and RM598 nett for 10 (10% discount for members) Having many outlets in different shopping malls in Klang Valley, Dynasty Dragon has started selling vouchers for their Abalone Treasure Pot, which includes 15 different ingredients, such as abalones, fish maw, sea cucumber, Japanese scallop, dried oyster, and many more. Prepared using delicious abalone sauce that has been cooked for 8 hours, the treasure pot comes with a free yee sang and is available for takeaway on Chinese New Year Eve. Photo credit to Canton Kitchen
Price: RM298++ for 5 and RM498++ for 10 (include 8 small dishes) Currently having 5 outlets, Canton Kitchen is a full-fledge restaurant offering a wide selection of Chinese dishes. To celebrate the coming Chinese New Year, they are promoting their Guang Xi style Poon Choi, which is served with lots of delicious ingredients, such as braised abalone, prawn, braised pork belly, roasted duck, poached chicken and many more! Their Poon Choi set includes 8 small dishes. 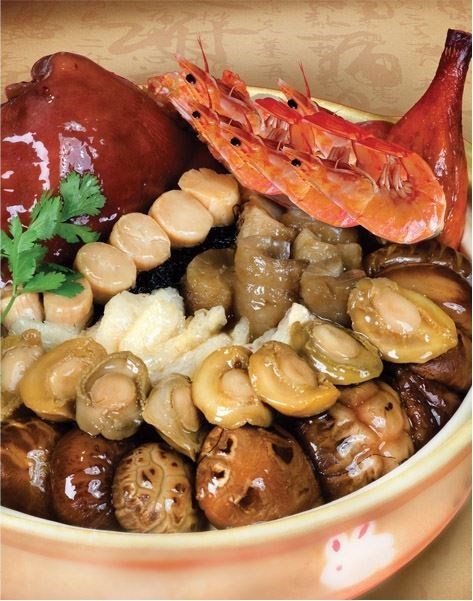 Photo credit to Di Wei Restaurant
Price: RM488++ for 5 and RM688++ for 10 Di Wei is an upscale Chinese restaurant nestled in Empire Hotel Subang. From 2nd January to 5th March, guests will have the opportunity to try their luxurious Poon Choi with as many as 18 high-quality ingredients, including abalone, sea cucumber, scallop, braised pork knuckle, prawn, roasted duck and so on. Just a perfect dish to feast with your family during this festive season! Photo credit to Parkroyal KL
Price: RM398 nett for 2 to 5 pax and RM988 nett for 6 to 10 pax If you prefer to enjoy the traditional dish of Poon Choi in a classy setting, give Si Chuan Dou Hua restaurant at Parkroyal Hotel KL a try. You will be able to whet your appetite here with a sumptuous bowl of Poon Choi filled with layers of fine ingredients. What’s more, the set comes with 6 main courses of Chinese delicacies. The 7-course feast is available from 1st January to 17th February.