8 Cafés for the Fluffiest French Toasts in Town!
French Toast, despite its name, is a popular breakfast worldwide owing to its easy preparation method. Being a simple dish that brings pleasure to many, it’s no wonder many restaurants have come up with fun, innovative rendition of the French Toast.

Fluffy, eggy and oh so irresistible! These 8 French Toasts are definitely worth paying for! (The restaurants are listed in no particular order. Some of the establishments below are not halal.)

VCR has already established itself as an iconic Hipster Café in KL with its modern hippy environment and good coffee. Its French Toast though, deserves an equal recognition. A decent-sized French Toast slathered with raspberry purée is served with coffee-flavoured ice-cream and sits atop a pool of dark mocha sauce. It also comes with a side of biscuit crumble, pumpkin seeds and a drizzle of maple syrup to finish. All the extra ingredients added great texture, complexity and was a great combination of flavours altogether. 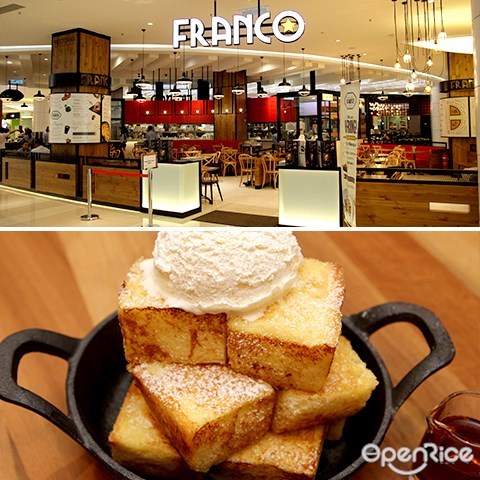 Franco serves arguably the thickest, fluffiest French Toast in town. Six squared pieces of French Toast comes piled high and crowned with a tennis ball-sized cream. The warm fluffy bread slowly melts the cream, which together with the maple syrup creates a smooth and delightfully sweet mouthful of eggy toast! Eggy bread comes in both sweet and savoury renditions here. The Parisienne is a three-layered French Toasts with turkey ham slices and gruyere cheese between each layer. Two cheerful sunny side-ups with perfectly runny golden yolk and a generous amount of homemade Bechamel sauce tops the stack. Meanwhile, the Good Stuff are cubed-fluffy toasts served with a scoop of vanilla ice cream, fresh mango slices, crushed nuts and drenched with fragrant Gula Melaka syrup for a refreshing twist. This cafe in KL is not for the faint hearted. Greasy, eggy and sinfully flooded with maple syrup, the sins committed by this French Toast doesn’t end here, for it is topped with grilled bananas, peanut butter aaandddddd BACON! A worthwhile calorie bomb for the pleasure you get. Tucked away in the quiet neighbourhood in USJ, this cafe in PJ was quite a pleasant surprise to find such nicely done French Toast here. The use of brioche bread brings greater flavour and texture to the eggy toast. This was served alongside fresh bananas and chocolate cream with a dash of icing sugar and butter scotch sauce. 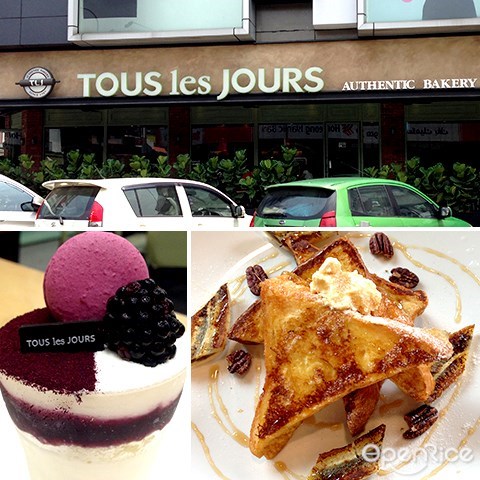 Tous le Jours, the bakery which recently rose to fame upon its grand entrance in the Malaysian market, also dishes out a great masterpiece. The Banana Ricotta Cheese & French Toast comes with grilled caramelized bananas, just the right amount of ricotta cheese and drizzle generously with maple syrup. Can’t decide between French Toast and Waffles? Why not try the French-Toast-and-Waffles hybrid from Frisky Goat in KL – the Elvis? The waffles which were lightly coated with egg gives an extra crunch. The curious invention is paired with home-made peanut butter, strawberry puree jelly, caramelized banana, fresh strawberries, vanilla ice cream and drizzled with chocolate and maple syrup. 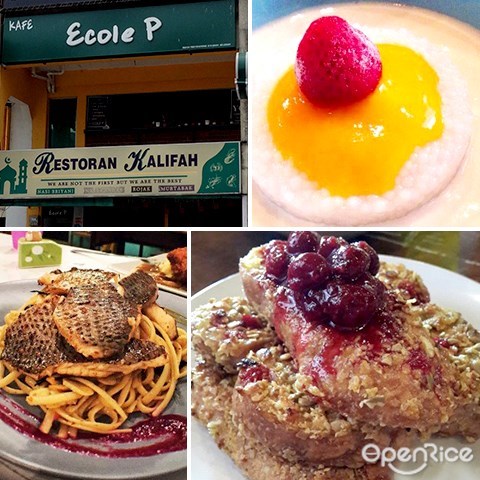 Ecole P in PJ does French Toast a little more than differently. The egg-coated bread are further coated with a second layer of crunchy crushed cornflakes and mixed seeds. Taste bud tantalizing cranberry compote tops the crunchy breadsticks, adding a dash of juicy sourness to the dish. 10 Cafes for The Perfect Eggs Benedict!

Besides Eggs Benedicts, get some great breakfast & brunch ideas here!